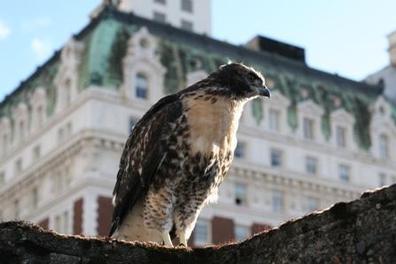 The Audubon Society of Portland is teaming up with Portland Parks & Recreation to release a red-tailed hawk back into the wild this Sunday, New Year's Day.

Join us at 11:00 am at Kelley Point Park (Marine Drive and Lombard) to see Miss Blue 33 get back to her native habitat.

Miss Blue was hatched last spring in the Seattle area and captured at SeaTac Airport as part of an effort to relocate young hawks away from the airport.

She got a blue wing marker (hence her name) and was released 75 miles north of the airport. 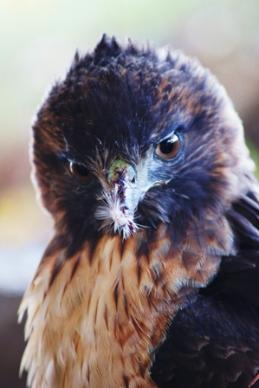 Miss Blue popped up again in late November, trapped in a chicken coop in Vancouver, Washington. For the last month, she's been at Audubon's medical facility being treated for minor injuries.

Did you know? Many birds of prey spend the winter in the Portland area - more, in fact, that during the breeding season of spring and summer. The Audubon Wildlife Care Center treats nearly 3,000 injured and orphaned wild animals each year, including birds of prey.

Portland is one of National Audubon Society's most active local chapters, with nearly 12,000 members, 400 volunteers, and a smart, talented staff. Audubon offers people of all ages and abilities a wide variety of hands-on natural history programs, reaching more than 14,000 schoolkids and 2,000 adults each year. Staff and volunteers also advocate for local and statewide efforts to protect habitats and species. Learn more about the Audubon Society of Portland - and see some amazing photographs of birds and other critters! - at audubonportland.org.

Lynne Terry in The Oregonian