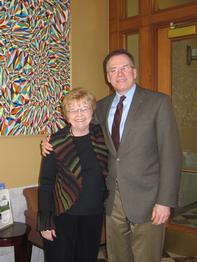 Nick was delighted to have former Oregon Governor Barbara Roberts in our office yesterday.

Governor Roberts served as the 34th Governor of Oregon from 1991 to 1995. To date, she is the first and only woman to be elected to that office in Oregon history.

She and Nick discussed the work Metro and Parks are doing to update the master plan for Washington Park.