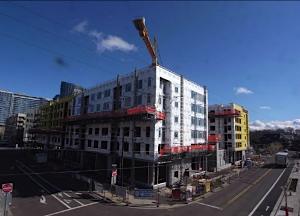 The new building, scheduled to open later this year, will bring 209 affordable apartments to the South Waterfront district.

Mr. Gray is best known for his philanthropy, supporting education and affordable housing. He developed Sunriver, Skamania Lodge, and Portland’s own Johns Landing.

What many people don’t know is that he is also a decorated veteran.

Mr. Gray served with the Army’s 82nd Airborne Division during World War II, rising to the rank of Lieutenant Colonel. He received a Bronze Star for his service.

It is fitting that this new building, which includes 42 homes for homeless veterans, will honor Mr. Gray.

Congratulations to John Gray, REACH, and our many project partners.

Tom Hallman Jr. in The Oregonian