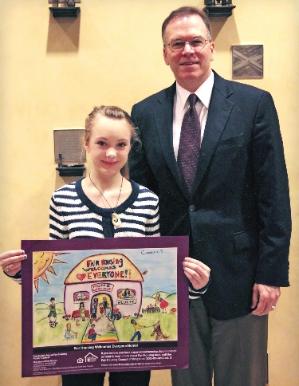 The proclamation calls on all Portlanders to "observe this month by joining in the effort to promote fair housing for all."

Cassiel is a seventh grader at Metropolitan Learning Center, and enjoys photography and art.  Poster judges at the Fair Housing Council named her the winner for the second year in a row!  Cassiel’s poster will be on display with other prize-winning entries at the Beaverton City Library from April 14 – 23.

The City of Portland and its partners have made a renewed effort to focus on combating illegal housing discrimination and removing other barriers that impede housing choice.

If you or someone you know has experienced discrimination in housing, please contact the Fair Housing Council of Oregon at (800) 424-3247 or information@fhco.org.