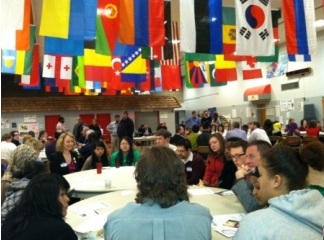 A number of local candidates were on hand at David Douglas High School to provide an opportunity for youth to interact with the people who will soon be representing them in our city’s government. Designed to help youth get involved in local politics, as well as teach candidates about youth priorities, the candidate forum was a success for all involved.

Attendees discussed a variety of issues, including the recent rise in violence against youth, budget cuts for all school districts, and how the candidates would work to promote "Our Bill of Rights: Children + Youth" if elected.

At the end of the forum, all youth under age 21 voted to decide the winner of the "youth vote" - who they’d like to have represent them on our next City Council. Considering that many of the youth who voted are not legally allowed to vote in May, this vote was a great occasion for them to share their perspective with the adults in our city.