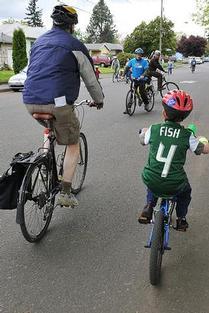 Walk Score, an online service that helps apartment renters and home buyers find neighborhoods where they can drive less, has ranked Portland the nation’s second-best city for “bikeability.”

The bike score is based on availability of bike lanes, hilliness, road connectivity, nearby amenities, and the percentage of people in that area who bike to work.

According to Walk Score, bike commuting increased 43 percent between 2000 and 2010. Last year, the Bureau of Transportation’s Annual Bike Counts showed that bicycle commuting climbed by more than 6 percent in Portland.

This month is the City of Portland’s Bike Month. The Portland Bureau of Transportation and its partners will be offering various bicycle-friendly events nearly every day at locations throughout Portland metro area.  View the complete schedule.

Joseph Rose in The Oregonian