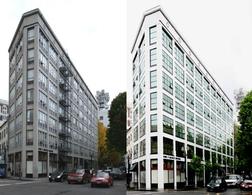 Originally built in 1910, the building was acquired by Central City Concern who converted the building from office space to affordable homes in 1994.  The organization then re-named the building to commemorate the work of Senator Mark O. Hatfield, who was instrumental in securing the Section 8 subsidy that has helped more than 3,200 individuals call the Hatfield building home.

The Portland Housing Bureau was proud to invest over $600,000 from federal Community Development Block Grant funds toward rehabilitating and preserving the affordable homes.