We’d like to share a story about a group of Lewis & Clark’s College ecologists tracking the restoration progress at Portland Parks & Recreation’s Riverview Natural Area. 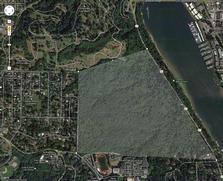 The story highlighted the work of professor Paulette Bierzychudek and her team on a quest to figure out what happens to natural areas after invasive species are removed. The idea came to her, reports The Oregonian’s Rebecca Koffman, during her bike commute through the area, when she saw Parks staff spraying herbicide on invasive species. This is a question, she told Koffman, “facing land managers all over the Pacific Northwest.”

Last year, Portland Parks and Recreation partnered with the Bureau of Environmental Services, Metro and the Trust for Public Land to purchase the 146-acre natural area in Southwest Portland from River View Cemetery for $11.5 million.

Since then, Parks has been working with the community through programs like No Ivy League which relies heavily on volunteers to help restore native plants, and removing invasive species like the English ivy, clematis, and blackberry.

The group will be conducting annual surveys to see how plant species change over time.  We are excited to see how the natural area’s ecology changes after being freed of invasive species!

How does a forest recover? Lewis & Clark study of River View Natural Area may yield answers

Rebecca Koffman in The Oregonian