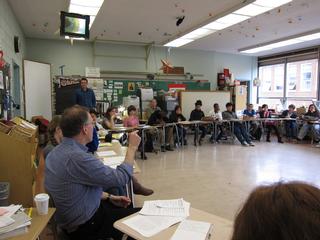 On Thursday, Nick had the pleasure of visiting a senior inquiry class at Roosevelt High School.

The third installment of our Civic Engagement Roundtable Events, Nick talked with about 40 students about their experiences living as youth in Portland. In partnership with the Multnomah Youth Commission, Nick has also visited Grant and Franklin High Schools this year.

Topics of discussion ranged from housing needs to the corporate tax kicker, but one thing was quite obvious: these students are engaged and truly care about their community. Nick listened to student concerns about local parks, and pledged to review the needs of neighborhood parks such as George Park and McCoy Park in North Portland.

Other concerns raised by the students included federal fiscal policy, and the obvious inequities between Roosevelt and other PPS schools like Lincoln and Wilson. Overall, Nick really enjoyed speaking with the students and will consider their feedback when making decisions as commissioner.