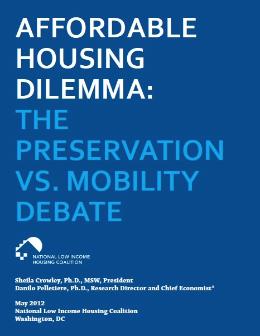 Across the country, cities are thinking about how best to meet the needs of people priced out of the private housing market. This conversation is at the intersection of important questions about race, opportunity, geography, and the role of government.

In April, I authored The State of Housing: A Portland Story, summarizing our record during my first four years as Housing Commissioner.

The National Low Income Housing Coalition has now joined the debate. In a report issued in May, it tackles a fundamental question: "should federal housing policy focus on preserving existing public and assisted housing, much of which is located in low income, predominately black neighborhoods, or should housing policy focus on helping the residents of this housing move to higher income and less racially segregated neighborhoods?"

Thoughtful consideration of this question requires acknowledging powerful market forces like rising rents, historically low vacancy rates, and unemployment; the modest impact public investments have on the market; and the role of personal choice.

The report advocates for a balanced approach to housing choice – preserving and improving housing in distressed areas, and investing in new housing in stronger neighborhoods.

That’s the approach we are following in Portland. We believe that every neighborhood should be open to people at every income level. Over the last few years, we’ve invested in mission-driven nonprofits across town, from Cully to South Waterfront, Lents to the River District, Inner Northeast to Hillsdale.

In a time of limited resources, we are committed to ensuring that the benefits of a livable community are extended to all.

The State of Housing: A Portland Story