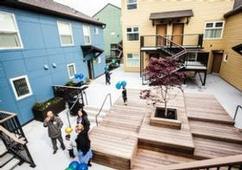 We recently highlighted a report by the National Low Income Housing Coalition: Affordable Housing Dilemma: The Preservation vs. Mobility Debate.

The report outlines the need for a balanced approach to housing choice – preserving and improving housing in distressed areas, and investing in new housing in stronger neighborhoods.

United States Secretary of Housing and Urban Development Shaun Donovan weighed in on the debate at a recent Mobility Conference co-sponsored by the Poverty and Race Research Action Council and the Urban Institute:

We agree with Secretary Donovan - every neighborhood should be open to people at every income level.