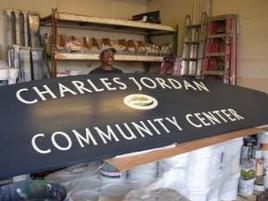 We expect to be joined at this historic occassion by Portland City Council, Mayor Sam Adams, former Mayors Bud Clark, Vera Katz, and Tom Potter, as well as many other past and present elected officials.

In June, the Portland City Council voted unanimously to rename University Park Community Center in honor of Charles Jordan, whose leadership paved the way for the beloved community center.

Family-friendly activities are planned for the event, including PP&R’s rock climbing wall, a nature scavenger hunt, games, and a kids’ performance. Hot dogs, cupcakes, and cold drinks will be served.

The special event will be followed by a free concert featuring Linda Hornbuckle in neighboring McCoy Park at 6:30 pm.

We like to give special thanks to our valued community sponsors including NIKE, Fred Meyer, Village Market, and Safeway.

Chase Hall in The Oregonian