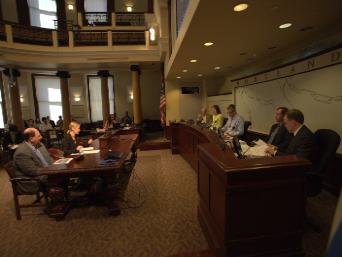 In late 2011, Council re-affirmed the policy that directs 30% of tax increment financing, or TIF, to the creation and preservation of affordable homes. We call it the 30% set-aside. Today, Council approved a $3.4 million investment of TIF set-aside from the South Park Blocks URA to preserve 89 affordable homes for older adults at the 1200 Building (1200 SW 12th), allowing them to age in place with dignity.

The new owner and manager of the building, Cedar Sinai Park, will renovate the aging building and bring a host of new services to residents, including nutrition classes, help scheduling medical appointments, library services, and exercise classes.

This upstream investment will save money by bringing services to older adults where they live so that can continue living independently, rather than struggling on their own until they're forced to move to facilities that offer higher-cost care.

Many older adults on fixed incomes struggle with housing costs. We have an obligation to make sure there are affordable homes available to them in vibrant neighborhoods like downtown Portland. Through the 11x13 campaign, we’re doing just that.

A number of buildings offering affordable homes to Portlanders are supported by federal rent subsidies, which typically last for 20 years. After that, the owner is free to convert the apartments to market-rate rents, forcing out low-income residents.

Several years ago, we identified 11 at-risk buildings with federal subsidies expiring by the end of 2013 and committed to working with partners to bring them up to date and renew the subsidies – the 11x13 campaign. These buildings provide quality, affordable homes to older adults and people with disabilities in desirable neighborhoods.

To date, we have preserved 6 properties - the 1200 Building will be the seventh. In all, the City's $9.7 million TIF set-aside investments in these 7 properties will leverage more than $60 million in federal subsidies, and more than $85 million in total investment, both public and private.

We're excited to partner with CEO David Fuks and the team at Cedar Sinai Park. They have a proven track record: they've preserved hundreds of affordable homes, will partner with us on two more 11x13 projects, and are working on a separate project, Kehillah House, to bring affordable homes and services to adults with disabilities.

Congratulations to Director Traci Manning and her team at PHB, David Fuks and Cedar Sinai Park, Jim Winkler, and all the partners whose efforts made this possible.

Reed Jackson in the Daily Journal of Commerce