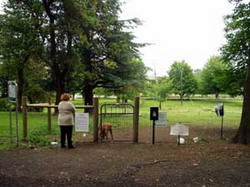 This Saturday, September 8, join community members and associates from Portland Parks & Recreation, the Trail Blazers, and Banfield Pet Hospitals, as well as some four-legged friends in a celebration of the renovations at one of Portland's most popular dog parks, Chimney Park in North Portland.

As part of a partnership between Banfield and the Trail Blazers, the pet hospital created an annual dog park renovation program. Trail Blazer fans are invited to vote on which dog parks receive a makeover courtesy of the two entities. Chimney Park won this year, the program's second year in action, with a resounding 74% of the votes!

Chimney Park is one of the longest-standing dog parks in Portland, and is the City's largest fenced-in park.

After the work party, beginning at 11 a.m., Trail Blazers radio broadcaster Brian Wheeler will lead a ribbon-cutting ceremony commemorating the renovation of the park. The park will reopen following the ceremony and neighbors are invited to come out and join the celebration with their pets! There will be cupcakes, raffle prizes, dog treats, and a professional pet photo booth until noon.

Banfield will provide information on veterinary services, dog park etiquette, and animal nutrition. Blaze the Trail Cat and the Blazer Dancers will also join the celebration. PP&R's own Assistant Director, Warren Jimenez, will join the festivities with his own two dogs, Rex and Whiskey.