The City created the Spirit of Portland awards in 1985 to recognize those who have made a positive difference in our community. The individuals and organizations chosen for these awards have helped make Portland a better place. 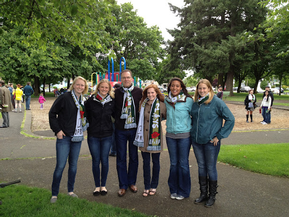 They are perhaps best known for their outstanding skills on the soccer pitch, but the women of the Pilots soccer team also gives back to their biggest fans - the Portland community.

Team members regularly volunteer for soup kitchens, neighborhood clean-ups, and children's soccer camps.  They also lend their support - and their decorating skills - to the Ronald McDonald House, where there is now a Pilots-themed family room.  2012 graduate Danielle Foxhaven even launched a new effort, Equipment Across Continents, to provide new and used sporting equipment to young teams in developing countries.

Most inspiring, the team rallied this year to support fundraising efforts for Harper's Playground- a new, inclusive and accessible playground in Arbor Lodge Park.  Inspired by six-year-old Harper Goldberg, who was born with Emanuel Syndrome, the lady Pilots launched a season-long silent auction and raised $5,000 for the playground.  This season, the team will donate tickets to raise additional funds. 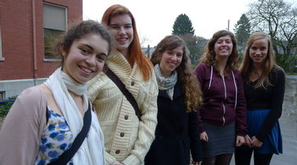 Last year, a team of young visionaries in Grant High School’s Environmental Club set out to build a community garden.

After meeting with City officials and community partners, the students decided to build a City-owned community garden as well as a Learning Garden for use by classrooms.

The team quickly gained community support and in October 2011, the students were thrilled to be awarded a State Farm Youth Advisory Board Grant in the amount of $50,300 to develop the garden.

In June, the team welcomed neighbors and students to the grand opening of the Learning Garden and the Grant High School Community Garden. The gardens contributed 43 plots to our 1,000 Gardens initiative, including 2 ADA accessible beds at each garden.

The Learning Garden will be used to advance student’s learning in botany, biology, foreign languages, sustainable agriculture, math, and more. Produce grown by the different classes will be used in the school's cafeteria and donated to the Oregon Food Bank.

These young leaders will be recognized at the Spirit of Portland award ceremony at 7pm on October 29 at the Doubletree Hotel.