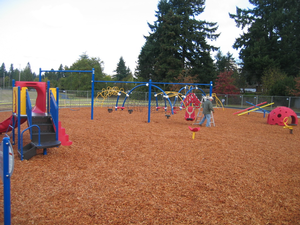 The new playgrounds include two new play structures, swings, a slide, see-saws, and other play equipment on top of a bark surface.

With the additional support from our private partnerships, other improvements have been made to other parks around Portland, including community gardens, better lighting, and playgrounds.