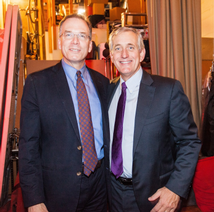 This morning, Charlie Hales was publicly sworn in as Portland’s 52nd Mayor.

Newly-elected Commissioner Steve Novick was sworn in on January 1 at the Multnomah Arts Center.

Rob Manning from OPB caught up with Nick for a quick interview about what the future will hold for City Hall with Mayor Hales and Commissioner Novick.

Beth Slovic in The Oregonian