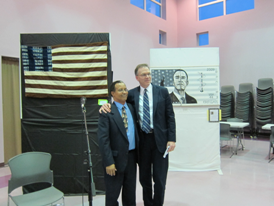 Obo Addy was one of Portland’s famed African musical composers and performers. Addy was one of the key originators of the seminal music movement known now as “worldbeat.” Addy was also a prominent member of the first generation African musicians to bring their tradition and popular music to Europe and America.

His legacy lives on with other prominent African and African American artists, including Grammy Award winner Esperanza Spalding.

Creating Community Artfully was a great success, and we hope it will continue for years to come. Thank you to the Portland Water Bureau’s Tim Hall, and creative visionary S. Renee Mitchell for organizing this wonderful event.