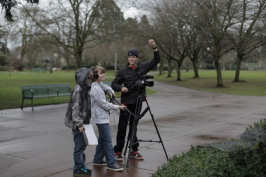 To mark the occasion, some local youth have started filming a documentary to share during the park’s centennial celebration this June.

PP&R is offering a recreational film class at the park’s community center for youth aged 11-17. The students are learning the ropes from two film professionals about how to create a documentary film. From lighting to sound, to asking the pressing questions that require more than just a yes or no answer, these students are turning out to be quite the filmmakers.

The documentary features beautiful shots of the park, including the oldest rose garden in the city, and interviews with park experts about how the park has transformed over the past century.

The rest of the documentary film will be shot on Saturdays over the next nine weeks.

Local students will have another opportunity to participate in a class in April. To learn more about the class or to register, please call PP&R's Recreation Coordinator at (503) 823-3620