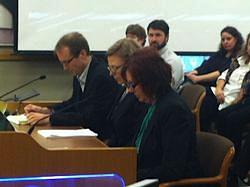 The City has prioritized this legislation in its 2013 Legislative Agenda. Portland Housing Advisory Commission (PHAC) members Deborah Imse of Multifamily NW and Marc Jolin of JOIN also testified in support.

The bill is a thoughtful and balanced approach to strengthening the Section 8 program statewide. It creates new protections for landlords who participate in the program, including a Landlord Guarantee Program, while removing the exception which currently allows landlords to reject applications from Section 8 voucher-holders without processing them.

As written, Oregon's current law has the effect of limiting choice and concentrating poverty. Under Speaker Kotek's bill, landlords will be required to treat voucher-holders like any other prospective tenant and process their application through normal screening criteria.

There are nearly 7,000 voucher-holders in Multnomah County alone: half are families, one-third have a disability, about half are people of color, and one in five is an older adult. Section 8 is the largest housing program in America, and it's important that we get it right. This balanced legislation will make the program more user-friendly while protecting the rights of all Portlanders in our rental housing market.

Nick and the City Council are proud to support this bill, an important step forward for civil rights in the state of Oregon.