Driving down Naito Parkway you might pass by Mill Ends Park and not even notice it - but the Guiness-certified “World’s Smallest Park” made national headlines last week when its lone Douglas Fir sapling was missing. 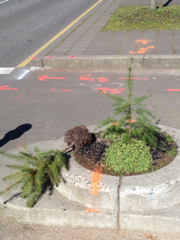 Mill Ends Park is located at SW Naito Parkway and Taylor. The smallest city park is part of Portland lore, and is said to be home to a family of leprechauns. Mill Ends is 2 feet in diameter, and was given its name by Oregon Journal writer Dick Fagan, who could see the plot of land from his office window.

Legend says that Fagan captured the leprechaun patriarch, who granted him a wish (per leprechaun tradition). Fagan’s wish? A park of his own. In 1976, Mill Ends officially became a Portland City park.

On Wednesday, Portland Parks & Recreation replaced the missing Douglas Fir with a new one. Perhaps thanks to some leprechaun magic, the missing tree turned up Friday morning - laid carefully on its side next to the new one.

PP&R staff is evaluating the old tree. If the tree is ok, it will be planted in another park.

The leprechauns have been too busy rejoicing to give any official comment on the park, but sources tell us that they are incredibly grateful to PP&R staff for providing them with the new tree to provide shade from the sunny months ahead.

Sara Hottman in The Oregonian