Today I voted to support paid sick leave for Portland workers. The final vote was 5-0. 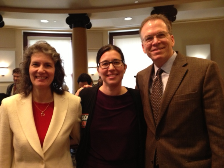 I believe sick leave is both a public health and social justice issue.

Too many low-wage workers have to choose between coming to work sick or losing a day’s pay. Too many parents have to send their kids to school sick rather than take time off and risk losing their job. And, too many food service workers pass their illness on to others.

The ordinance we adopted today is not effective until next year—giving the State legislature the opportunity to act. My preference is for a state-wide solution that benefits all working families in Oregon.

Based on the feedback we received I supported amendments to Commissioner Fritz’s proposal, which strengthened the ordinance by simplifying its requirements and reducing the regulatory burden on employers providing an equal or better benefit.

I am committed to ensuring that the rule-making process is inclusive and transparent.