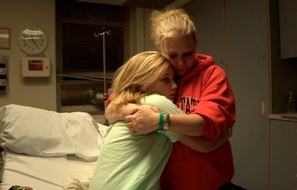 On Monday night, our community will be in the national spotlight with the HBO premiere of American Winter.

American Winter is a powerful documentary that follows eight Portland families through the great recession.

The film left me with conflicting feelings of shame and pride.

Shame because so many middle class families who play by the rules have to choose between paying rent and feeding their children.

Shame because so many hardworking families live in a "one strike and you’re out" economy – at risk of falling through the cracks because of a sick child, layoff, or foreclosure.

But also pride in the dedication of our partners – from 211Info to Human Solutions and Impact NW – who work tirelessly to support families in need.

Pride because we live in a community that believes we are all in this together.

I hope you will watch American Winter Monday at 6pm or 9pm on HBO. The film challenges stereotypes about poverty and restores the human face to families hurt by the recession.

My hope is that the film changes the debate in this country. Together, I believe we can turn an American Winter into an American Spring.

Molly Young in The Oregonian