Can you make minimum wage and expect to call home affordable? According to the US Department of Housing and Urban Development, a home is considered “affordable” if a person spends no more than 30% of his or her income on rent or mortgage payments. Families spending more than 30% of their income to rent a home are 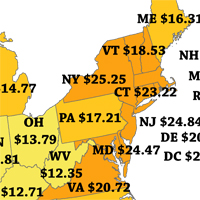 Out of Reach 2013, from the National Low Income Housing Coalition, reveals a startling fact: no full-time worker earning minimum wage can afford a two-bedroom apartment in any state in America.

What does this mean? That hardworking families across the country are either priced out of the housing market entirely or are rent-burdened, spending so much of their income on rent that they’re unable to save enough to buy a home, save for retirement, and take advantage of traditional wealth-building strategies.

Out of Reach 2013 reports that hardworking families across America must work far more than 40 hours a week to avoid being rent-burdened. A particularly telling graphic shows how many hours a week a person would have to work to afford a 2-bedroom rental. The findings are shocking. For example, someone earning minimum wage in California would have to work 129 hours a week – the equivalent of more than three full-time jobs – to afford a home. In Oregon, a minimum wage earner must work more than 70 hours a week – nearly two full-time jobs – to avoid being rent-burdened.

It’s clear that hardworking Americans are hurting. Increasing rents, stagnant wages, and a shortage of affordable housing has made it impossible for hardworking families to achieve the American dream.

The answer, according to this report, is an expanded supply of affordable homes dedicated to the lowest-income renters. Housing costs vary across the nation, but the lack of affordable housing affects low-wage workers in every corner of the country.

To read the report or to learn more about Out of Reach 2013 visit the National Low Income Housing Coalition website.

photo courtesy of Out of Reach 2013