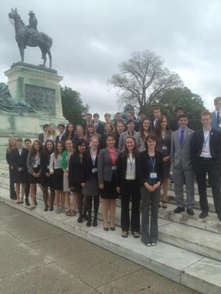 Congratulations to Grant High School’s Constitution Team on winning first place at the 26th annual national “We the People” competition!

The “We The People” competition included three days of simulated congressional hearings on the U.S Constitution and the Bill of Rights. Grant High School won first place, competing with schools from 45 states and the Washington D.C. 1,400 students participated in this year’s national competition.

In January, Nick was honored to be a judge again this year at Lake Oswego High School for the regional competition.

The last time Grant went to nationals was in 2011, where they placed seventh. This year they took the gold!

Great job Grant on representing Portland with your tremendous win!