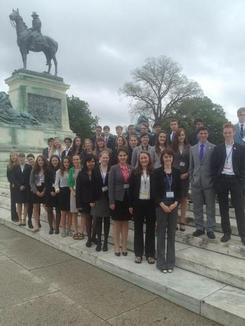 The Portland City Council will recognize and honor the Grant High School Constitution Team for winning first place at the National Finals of the 26th annual We the People: The Citizen and the Constitution competition in Washington, D.C.

The ceremony will be held during the Council Meeting on May 29 at 9:30am.

Nick, who proudly serves as a judge each year in a regional We the People competition, will read a Proclamation on behalf of the Council.

Grant’s championship team placed first among fifty-six of the nation’s best high school teams competing in Washington, D.C.  The We the People competition, designed to simulate congressional hearings, teaches students about the United States Constitution and Bill of Rights.

In 2012, the Lincoln High School Constitution Team won nationals, making this the second year in a row an Oregon school earned first place!

The Grant Constitution Team brings great distinction to their school and our community. Congratulations to the students, coaches, teachers and parents, as well as the Classroom Law Project, sponsor of the local We the People program.