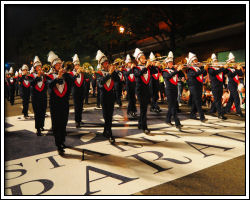 On Saturday, Nick and his son enjoyed a convertible ride while representing the City of Portland in the 2013 Portland General Electric/SOLVE Starlight Parade!

The Starlight Parade began in the early 1900s when illuminated floats were built on trolley cars and made their way on trolley tracks through downtown streets. Today the parade features nearly 100 illuminated floats, marching bands, beautiful cars, and much more through the 2.25 mile parade route.

The Starlight Parade is one of the Rose Festival’s largest events. It brings over 250,000 spectators to watch the sparkling spectacle.

Nick commented on this year's parade that "the weather was perfect, the crowds the largest I have ever witnessed, and the spirit unbeatable."

To learn about upcoming Rose Festival events visit the Portland Rose Festival website. Don't miss the Grand Floral Parade this Saturday at 10:00 AM.