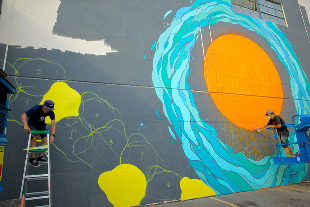 Ever wonder what it’s like to see the artist’s process from start to finish? The Forest For The Trees project brought artists from around the globe to collaborate together and create incredible murals in Portland – all while exposing the community to the creative process.

Murals were a sensitive issue in Portland for many years because of a legal challenge in the city. As The Portland Mercury reported “Legal and regulatory battles tied up Portland's mural artists for the next ten years, until the current, more artist-friendly rules were put in place in 2009. Over the last four years, murals have increasingly appeared on walls around the city.”  This project adds 10 new incredible murals to the city’s backdrop.

The week-long project went from August 19 – 25, but the art will be enjoyed for years to come. View the new murals at:

Special thanks to event organizer Gage Hamilton, all the artists, and the sponsors for making Portland a little brighter.

Alison Hallett in The Portland Mercury

Michael Lloyd in The Oregonian