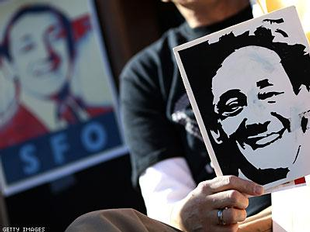 A year ago, Portland City Council wrote a letter to the Citizens’ Stamp Advisory Committee requesting a commemorative stamp be made in honor of former San Francisco Supervisor and LGBTQ activist Harvey Milk.

Yesterday, the U.S. Postal Service announced they will issue the commemorative stamp!

Harvey Milk was the first openly gay man elected to public office in California.Harvey was very open about his sexuality and encouraged other LGBTQ people to come out and be proud of who they are.

The stamp marks an important milestone; Harvey will be the first LGBTQ elected official to be featured on a U.S. stamp.

Harvey’s leadership and courage inspired many, and paved the way for future generations of LGBTQ leaders.

Harvey Milk to Be Honored on U.S. Postage Stamp