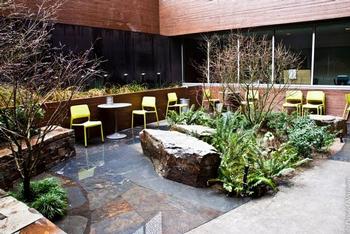 Bud Clark Commons opened in 2011. The unique eight-story building, named for former Portland Mayor Bud Clark, provides a continuum of services. The City was proud to partner with Transition Projects and Home Forward to provide access to healthcare, shelter, and counseling to help homeless people transition from the vulnerability of the streets to safe, permanent homes. It includes a walk-in day center with access to services, a temporary shelter with 90 beds for homeless men, and 130 studio apartments for very low-income individuals.

Mayer/Reed designed the streetscape and exterior pedestrian spaces and two courtyards at Bud Clark Commons. They also created the building entries, a gardening terrace, and eco-roofs. The courtyards and exterior spaces were intended to become transformative places that would create a positive environment of hope, dignity and respect.

Winning the ASLA award is another wonderful recognition to an already incredible list of awards and accomplishments for Bud Clark Commons. In addition to LEED platinum certification, the Commons have also received the 2013 Residential Architect Design Awards Project of the Year, the American Institute of Architects (AIA) and the U.S. Department of Housing and Urban Development (HUD)’s "Creating Community Connections" award, and was featured in Dwell Magazine in 2012.