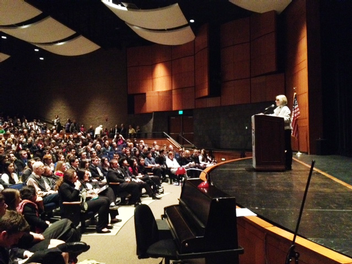 Last night, Nick was proud to join Portland-area students, teachers, and parents for the regional We The People competition.

We the People, sponsored by the Classroom Law Project, is designed to simulate congressional hearings, and teaches students about the United States Constitution and Bill of Rights. Portland teams - from Grant and Lincoln High Schools - have taken home the national championship for the past two years.

This was the 5th year Nick has been honored to serve as a competition judge and give a keynote speech highlighting current constitutional challenges and debates.

Nick chose an often-controversial topic: the legalization of marijuana. While it remains an illegal drug by Federal Law, many states allow medical or recreational marijuana use -- and the Federal government is not yet enforcing the law. The debate continues, and Nick argued that the student competitors and constitution experts in the room, as our next generation of voters, will be a strong and informed voice going forward.

After last night's competition, teams from Lincoln, Grant, Franklin, Lake Oswego, and Central Catholic will advance to the state championship on January 25. Congratulations to all the teams.