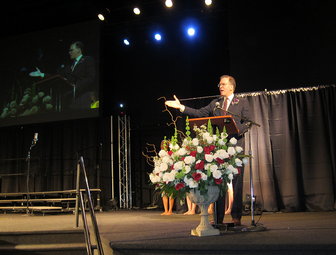 This weekend, Nick was pleased to attend three events honoring the life and legacy of Dr. Martin Luther King, Jr.

Each year, people across Portland come together on his birthday to volunteer their time, share their stories, and reflect on how to keep Dr. King’s dream alive.

On Sunday evening, Nick attended the Albina Ministerial Alliance’s special service at Allen Temple Church, which focused on Dr. King’s legacy of non-violence. The service welcomed many community leaders – each reflecting on the life, words, and deeds of Dr. King.

Nick was honored to speak at the service. He addressed two questions: how best to celebrate Dr. King’s birthday, and when we will know that his dream has been fulfilled.

Monday morning, Nick attended the The Skanner’s 28th Annual Martin Luther King, Jr. Breakfast at the Oregon Convention Center.  Thanks to Bernie and Bobbie Foster for another inspiring event.

Nick ended his day by attending the World Arts Foundation’s "Oh Freedom!" event in East Portland, honoring the lives of both Dr. King and Nelson Mandela, and the 1963 March on Washington.

Nick was joined by his Public Advocate, George Hocker Jr., who proudly participated in the 1963 March.