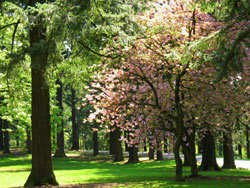 Over the last week, I’ve heard from a number of people concerned about a future Portland Water Bureau project in Mt. Tabor Park, and its potential effects on the trees and landscape of the park.

As part of a federal water quality mandate, the Water Bureau is required to disconnect the park’s open reservoirs from the water distribution system by the end of 2015. But not to worry – we’ll still be able to fill the reservoirs with water in the future.

The bureau must go through a Land Use Review before they start any work. There are two possible review paths – Type II and Type III. Based on community feedback, I have directed the bureau to submit a Type III application, which includes a public hearing before the application is approved.

Water Bureau planners and engineers worked closely with Portland Parks & Recreation to develop the current tree mitigation proposal (including planting 1,200 new trees), and I appreciate the hard work they have done to date.

That said, I share community members’ concerns regarding the potential impact on trees in the park. Accordingly, I have directed Water Bureau staff to work with the Urban Forester at Portland Parks & Recreation to take a fresh look at this project and its potential impact to Mt. Tabor’s trees.

As part of this fresh look, Water and Parks staff will review the project’s potential impacts and the current mitigation proposal, and will identify any opportunities to further reduce the effects on trees in the park.

Here’s some additional information about the current proposed project and Mt. Tabor’s trees: