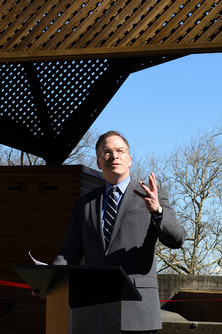 The Lovejoy Fountain, built in 1966, is part of the historic Halprin Open Space Sequence.

The Open Space Sequence was born from architect Lawrence Halprin's vision for community in the heart of Portland. His innovative design links fountains, plazas, parks, and other open spaces with the bustle of the city. In his own words, Halprin explained that "the space is choreographed for movement with nodes for quiet & contemplation, action & inaction, hard & soft, yin & yang."

In addition to the Lovejoy Fountain, the Sequence links some of Portland's most well-known downtown Portland Parks & Recreation spaces - including the Ira Keller Fountain and Pettygrove Park.

Last year, the Halprin Sequence was added to the National Register of Historic Places.

Portland wouldn’t have its outstanding public spaces without our public/private partnerships. Thanks to the generous donation from CH2MHIll and the ongoing work by the Halprin Landscape Conservancy, the Lovejoy Fountain and Halprin’s legacy will last for the next generations of Portlanders.

Rebecca Koffman in The Oregonian