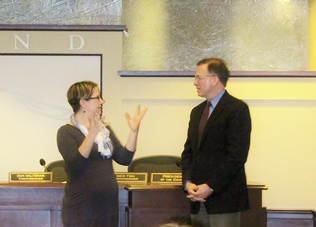 He motivated students to become our future leaders and knowledgeable citizens.  Nick also encouraged students to continue participating in their high school’s Constitution Team – and work toward regional, state, and national “We The People” competitions.  Nick has enjoyed acting as judge for the regional “We the People” for the last five years.  The competition consists of mock Congressional hearings, where students’ understanding and prowess of the U.S. Constitution is put to the test.

Lincoln High School, this year’s state champion (and 2012 national champion), will compete in the “We the People” national finals in congressional hearing rooms on Capitol Hill in Washington, D.C. from April 25 - 28.  Here’s to a national victory in 2014!