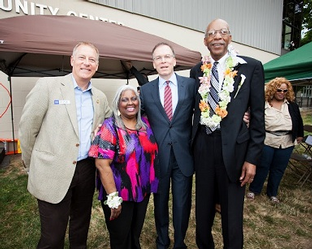 This morning, we lost a great leader and urban pioneer: Charles Jordan.

Charles was one of my heroes. A highlight of my public service was honoring Charles at the dedication of the Charles Jordan Community Center in the Portsmouth neighborhood in 2012.

Charles was a trail blazer. His service to Portland dates back to 1974, when he was appointed and later elected as our first African American City Commissioner.

In 1989, he was named Director of Portland Parks & Recreation. Under his leadership, Parks’ budget increased by more than $35 million – and paved the way to the outstanding parks and recreation facilities we enjoy today.

Charles was passionate about the families and children we serve. He was fond of reminding his audiences that “parks are more than just fun and games.” That through sports and activities young people learn the life lessons that translate into productive lives.

Charles leaves behind a beautiful legacy. And his son Dion continues the family tradition by serving on the Parks Board.

My thoughts and prayers are with his family and friends. On this sad day for the Parks family, we give thanks for the life and legacy of Charles Jordan.

Anna Griffin in The Oregonian