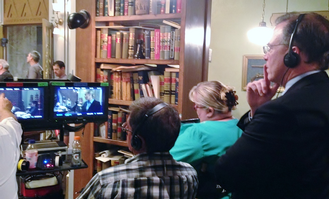 The Portland area is becoming a go-to location for TV shows!

From Grimm to Leverage, and Portlandia to yes, even The Real World, production companies are quickly learning the benefits of bringing their shows to the Pacific Northwest.

On Friday, Nick was pleased to visit the set of The Librarians, the latest TV show filmed in the Portland area. The show, starring Noah Wyle and Rebecca Romijn, started as a series of made-for-TV movies on TNT – the network is now launching a 10-episode TV season.

As Council Liaison to the arts and small business, Nick supports creative jobs that contribute to our local economy.  Since 2007, the Portland metropolitan area has seen a 24% increase in film and TV production jobs.

Electric Entertainment (the production company behind The Librarians) co-founder Rachel Olschan, and Business Development Manager Jose Behar, gave Nick a tour of the set and discussed opportunities for further boosting the creative economy in Portland.

Although Electric Entertainment is based in Los Angeles, CEO Dean Devlin has brought several pilots and two TV shows to Portland (the other is Leverage), and looks forward to bringing more productions to Oregon!