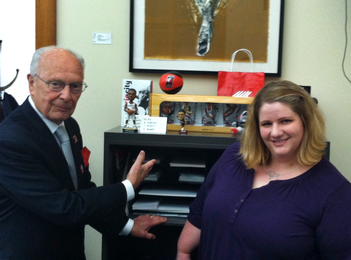 This morning, City Council was proud to honor the late Dr. Jack Ramsay, who coached the 1977 Portland Trail Blazers to a championship.

City Council unanimously voted to add the name "Ramsay Way" to N. Winning Way, which runs along the north side of the Rose Quarter. Sign toppers, complete with a Dr. Jack inspired plaid patch, will be added to the street signs.

Dr. Jack was a force in Oregon, both on and off the court. City Council welcomed the Trail Blazers' Mike Lewellen, and Bill Schonely, the undisputed "voice of the Blazers" to Council this morning to learn more about Dr. Jack -- and the legend behind one of Portland's best nicknames: Rip City!

Mr. Schonely was kind enough to stop by our office to admire our tribute to the Blazers -- who are currently working toward a Playoff Round 2 victory against the Spurs.