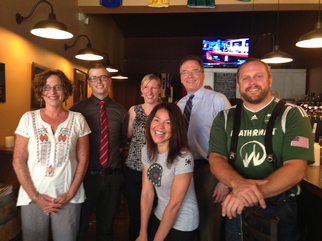 Yesterday, Nick was proud to present a proclamation celebrating our local small businesses and recognizing May 12 – 16 as Portland Small Business Week!

The proclamation celebrates the important contributions that small businesses make to our local economy and neighborhoods.

To help celebrate, Nick teamed up with Portland Timbers’ mascot Timber Joey and headed over to Bazi Bierbrasserie in the Hawthorne Boulevard Business District. There, with business owner, Hilda Stevens, they got a chance to preview Kick-Kick-Score, a 9-hole mini fut-golf kicking course (think miniature golf, but with soccer balls).

Funded by one of four soccer-themed grants from Venture Portland, the Kick-Kick-Score game will be featured up and down Hawthorne Boulevard during the Major League Soccer (MLS) All-Star Game celebrations coming up the first week of August.

As Council liaison to Venture Portland and the City’s representative to MLS, Nick ensured that Venture Portland was involved in the planning of the All Star Game celebrations from the very beginning.

The result? The whole city, including our neighborhood small businesses will benefit from the economic impact that the All-Star Game will bring.