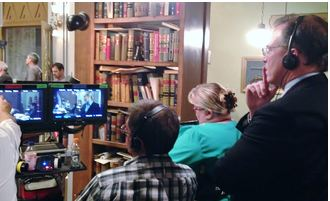 Devlin, CEO of the Los Angeles-based production company Electric Entertainment, has produced and co-written a number of Hollywood blockbusters, including Independence Day and The Patriot.  Devlin also brought Portland its first regular TV series, Leverage, and is currently wrapping up season one of The Librarians.

Last month, Nick was pleased to visit the set of The Librarians, where he got a tour and watched filming.  The show, starring Rebecca Romijn and Noah Wyle, is filmed entirely in the Portland area. As Council Liaison to the arts and small businesses, Nick supports creative industries that contribute to our local economy.

Devlin, a strong advocate for filming in Oregon, says he’d be interested in bringing more feature films to Oregon – or even film all of his productions here.

Oregon provides many advantages to film companies.  Portland provides unique backgrounds like our iconic Portland, Oregon sign. Our architecture has also been used to double as New York, Washington, and even Eastern Europe.  Oregon also boasts no sales tax, a talented pool of actors and behind-the-scenes people, strong unions, great locations donated by the City or State, and perhaps most importantly - the general, good-hearted nature that Portlanders are famous for.

“In L.A., if you go to a local neighborhood to shoot, everybody’s blasting music or turning up their car radios,” Devlin shares. “In Portland, they come out with trays of cookies and milk.”