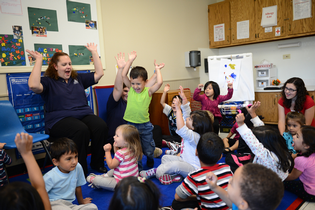 Knowledge Universe, a global educational organization, provides something very important for our children’s growth - early childhood education. As one of the largest employers in the metro area, it’s also an important part of Portland’s economy.

Based in the City of Roses since 1998, Knowledge Universe’s headquarters is located in the Lloyd district, where it employs nearly 400 people. Another 500 work at their early education centers around the city.

The company is committed to Portland, and proved that recently with a new 10-year lease for its headquarters.

As Council liaison to Venture Portland, Nick was pleased that Knowledge Universe renewed its commitment to Portland. Securing 400 jobs for the next 10 years is a boost for the Lloyd neighborhood, and can leverage further economic development.

“Staying in Portland’s Lloyd District makes the most sense,” said Knowledge Universe CEO Tom Wyatt. “Signaling this lease solidifies our commitment to the city of Portland and ensures our local employees will be in a central location with wide access to public transit for at least the next decade.

Why Knowledge Universe is sticking around in Portland