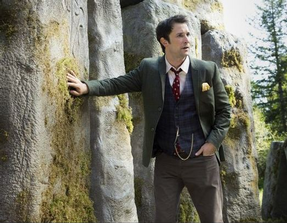 Oregon’s creative economy is growing – thanks, in part, to Hollywood.

Nestled right outside of Portland, in a large production studio, is the set of the new TNT TV-series, The Librarians.  In Sunday’s Oregonian A&E Section, Jeff Baker shared more about the new series, which airs this December.

Starring Rebecca Romijn and Noah Wyle, the 10-episode season is filmed entirely in the Portland Area.  The show, about the adventures of librarian Flynn Carsen (Wyle), protector of historical and mythological artifacts, is set to air in over 100 countries.

Nick was pleased to visit the set of The Librarians in May, where he toured and watched filming.  As Council Liaison to the arts and small businesses, Nick supports creative industries that contribute to our local economy.

“Grimm,” “Portlandia,” “Leverage,” and now “The Librarians” are making rubbing elbows with actors in Portland more likely than ever – and it’s having a big impact on our economy.

Oregon offers many incentives to film companies.  Portland, with its mixture of modern and historical architecture, had doubled for diverse locations, including London and Dubai.  Oregon also boasts no sales tax, strong unions, great locations, and a talented pool of actors and behind-the-scenes people.

Executive producer and show-runner John Rogers says, “This Portland crew, pound for pound, is the best crew I’ve worked with in 20 years.  Full stop. None better.  We’re able to get incredible value out of them.”

Jeff Baker in The Oregonian

Photo courtesy of The Oregonian.