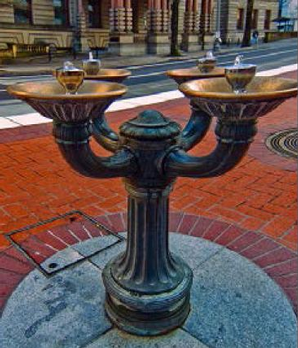 Perhaps the best known drinking fountains in the City of Roses are the legendary "Benson Bubblers," the iconic four bronze bowls that provide fresh, Bull Run drinking water throughout downtown. The Benson Bubblers were named after businessman and philanthropist Simon Benson who donated $10,000 for the purchase and installation of 20 fountains in 1912.

Today, there are 51 “true” four-bowl Benson Bubblers. Forty-eight are installed in downtown Portland while three reside on the Eastside. Two bubblers do exist outside of Portland; one in Portland’s sister city Sapporo, Japan and the other bubbles at the Maryhill Museum of Art in Washington State.

An additional 79 bubblers replicating the original style have been cast and installed over the years, not to be confused with the “true” 51 Benson Bubblers.

Single Bowl Bubblers
The 70 single-bowl fountains can be found from Linnton to Sellwood, and from the SW Hills to Mt. Scott. Although the single-bowl variations look like Benson Bubblers, they are not.

Stone & Other Style Single Bowl
The Water Bureau is also responsible for the upkeep of two stone fountains, located respectively in Northeast and Northwest Portland, and four other single-bowl fountains in Northeast, North, and at the Powell Butte Nature Park’s Visitor Center.