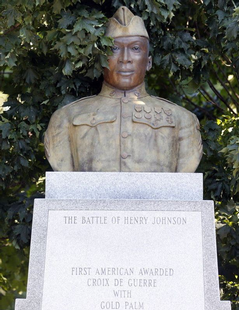 Henry Lincoln Johnson may receive the Congressional Medal of Honor after all—thanks to the recent recommendation of Secretary of Defense Chuck Hagel, and the tireless support of U.S. Senators Chuck Schumer and Ron Wyden, The Skanner, and many others.

A WWI veteran who served in the 369th Regiment, Sergeant Johnson was the first American to receive the France’s highest military honor, the Croix de Guerre with Palm.

The 369th, also known as the Harlem Hellfighters, was an African American regiment which served with distinction during WWI.  Nick’s grandfather, Hamilton Fish, was a Captain in the regiment.  During WWI, U.S. troops were segregated. So, the Hellfighters fought under the French flag.

In 1918, a wounded Sergeant Johnson courageously fought off a German raider party for an hour, with only his jammed rifle and bolo knife. His actions saved his partner, Needham Roberts, from capture.

We hope 2014 is the year Sergeant Johnson receives our nation's highest honor for his heroism.

WWI Hellfighter Closer to Getting Medal of Honor Award

Helen Silvis in the Skanner

Photo courtesy of the Associated Press.