Join Nick and the Portland community on Sunday to celebrate the life of Commissioner Amanda Fritz's husband, Dr. Steven Fritz.

Beginning Sunday at 5pm at Terry Schrunk Plaza, we will honor his life in quirky Portland style -- to match his wondeful life and his beloved Zebra car. 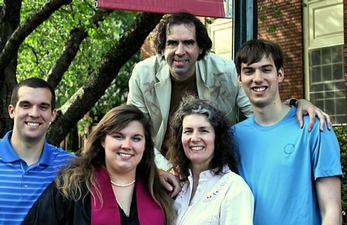 Portland City Commissioner Amanda Fritz has announced plans for events to celebrate the life of her husband, Dr. Steven Fritz, who died suddenly in an automobile accident in Salem, OR on September 24, 2014, while on his way to work at Oregon State Hospital.  He was killed instantly by a pickup crossing the median on I-5 in wet weather, hitting his beloved zebra-painted car.  He had often loaned it to his wife for community parades.  Commissioner Fritz first heard about the crash because passers-by recognized the car and contacted her.

One of Steve’s friends wrote on hearing the news, “If you've ever thought your car was boring, and you'd like to paint it up, say, turn it into a zebra car? Well DO IT, people! And when you die, people will not sit around wondering, "Did she do the things she wanted? Did he express his inner self? Did she tragically ignore her inner weirdness?" They will be horrifically sad, but they will smile every time they think of you, your car, those stripes.”

“That comment illustrates why people loved and were inspired by Steve,” said Commissioner Fritz.  “He made the most of every day, finding entertainment even in mundane chores like the daily commute.  Our children and I are greatly comforted by the outpouring of support we’ve received.  He touched so many lives, in great and small ways.  We appreciate seeing the recognition that he made a difference in our community – while at the same time having fun.”

Everyone is welcome to attend the public Celebration of Life on Sunday, September 28 at 5p.m. in Terry Schrunk Plaza, SW 3rd and Jefferson.  Participants are encouraged to bring a candle, and to have fun dressing in whatever you feel is appropriate to honor him and/or amuse yourself and others.

The family suggests donations to honor Dr. Fritz in lieu of flowers and cards be made to: