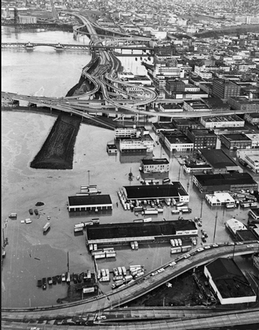 Today, December 22, marks the 50-year anniversary of the 1964 Christmas Flood.

The flood followed heavy rain, and caused significant damage throughout the Pacific Northwest, including here in Portland.  At its peak, water hit the top of the downtown waterfront’s seawall.  Parts of the Steel Bridge were underwater, and the Hawthorne Bridge was severely damaged debris, including nearly 1,000 logs.

Heavy rains and floods also damaged the water system infrastructure at the Bull Run Watershed, Portland’s water source.  Only one of the three conduits remained intact and in service throughout the flood.  Thankfully, it still provided Portlanders with enough water to avoid shortages.

Learn more about the flood from Clackamas County’s oral history videos.  The videos are presented through personal stories from Sandy River basin residents, where the Bull Run Watershed is located.

John Killen in The Oregonian

Photo courtesy of The Oregonian.