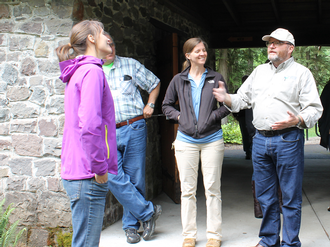 This morning, Water Bureau Administrator David Shaff announced his retirement, after 37 years of service to the City:

I recently let Commissioner Fish know that I intend to retire effective June 30, 2015, my 37th anniversary as an employee of the City of Portland and my 10th anniversary as the Administrator of the Portland Water Bureau.

Commissioner Fish has asked me if I will stay on beyond June 30th if necessary while he and his staff conduct a search for a new director and I have said that I would.

Nick is grateful for David's service to the City, and released the following statement:

Today, Portland Water Bureau Director David Shaff announced his decision to retire after 37 years of service to the City.

While I was surprised by David’s decision, I respect his choice and am grateful that he has committed to work with me and the bureau on a transition plan.

Since I was assigned to lead the City’s two utility bureaus in June 2013, I have admired his dedication and professionalism, his willingness to explore new and better ways of doing business, his customer service ethic, and his strong commitment to using ratepayer dollars wisely. David has been instrumental in recruiting and developing a high performance team at the bureau.

Thank you, David, for your 37 years of service!