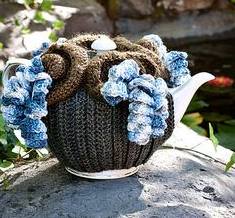 The Benson Bubblers are Portland’s iconic bronze drinking fountains. They provide fresh, Bull Run drinking water throughout downtown. The Bubblers are so famous, there’s even one in our sister city, Sapporo, Japan.

And now, their likeness can even keep your teapot nice and cozy!

The City of Portland has hosted the Rose City Yarn Crawl for the past six years. The event features unique patterns from yarn shops around the city.

This year, designers took inspiration from Portland’s iconic landmarks and destinations, including our Benson Bubblers.

All of the patterns presented at this year’s crawl, including the Benson Bubbler Teapot Cozy, can be downloaded here! The crocheted creations are also featured in the 2015 eBook, “Postcards from Portland.”

Check out the Portland Water Bureau’s website to learn more about the Benson Bubblers.