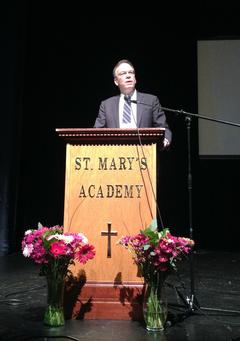 Today, Nick was honored to speak to students at St. Mary’s Academy, as part of the school’s Poverty Awareness Week.

Nick talked about the documentary, American Winter, which chronicles eight Portland families who struggled during the Great Recession. The film highlights the challenges faced by working families in a “one strike and you’re out” economy.

American Winter features interviews with a number of community leaders, including Nick. The film won a number of awards, and was nominated for an Emmy.

Nick described the film as a “call to action,” and urged students to think about the ways they can make a difference addressing poverty in our community.

Special thanks to Nick’s hosts, including senior student chair, Monet Tyler, as well as the other student advisors and teachers. And congratulations to the St. Mary’s family for shining a light on poverty.