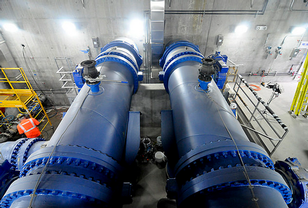 A new reservoir at Kelly Butte in Southeast Portland is now serving pristine Bull Run water to customers across our community.

The storage tanks are now underground, so they have disappeared from view. Crews will continue working this year to construct access roads and fences, and to complete landscaping – including  planting more than 1,660 trees and 7,250 scrubs across the entire site.

Check out the Water Bureau’s website for more information.